The Sound Of Bacharach & David 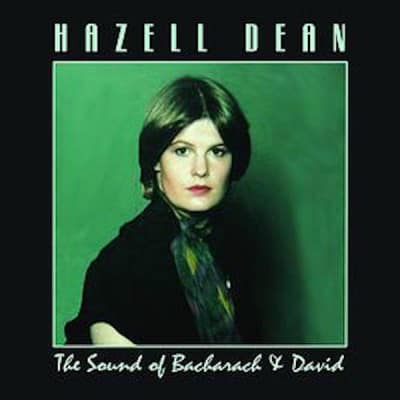 A unqiue opportunity to buy a collector’s item for all fans of Hazell Dean. This album was originally recorded 1974 as a promotional album for the catalogue of songwriting giants Bacharach & David.

The collection features the original 11 track album on CD for the very first time.

This album has been mastered by a vinyl restoration expert using all the latest techniques to ensure the best possible sound. The original master tapes are long since lost.

The album features Bacharach & David’s best loved tracks including – ‘What The World Needs Now Is Love’, ‘I Just Don’t Know What To Do With Myself’, ‘Walk On By’, ‘Close To You’ and ‘Trains & Boats & Planes’

The CD booklet will feature the original sleeve.

The sleeve notes have been written by Hazell Dean.

The extensive booklet features a complete discography and features rare photographs of Hazell from the period.

This is Cherry Pop’s 3rd Hazell Dean release following the reissues of ‘Heart First’ (CRPOP44) and ‘Always – Deluxe Edition’ (CRPOPD96) with more projects in the pipeline.

The definitive doyenne of the Hi-NRG scene, Essex-born Hazell Dean found mainstream success in 1984 with the #6 hit ‘Searchin’ (Gotta Find A Man)’ on the Proto label. The Stock Aitken Waterman-produced follow-up, ‘Whatever I Do (Wherever I Go)’, reached #4, giving the Hit Factory team their first Top Ten single and marking the beginning of a partnership with Hazell which continued until 1991. After the release of her 1985 album “Heart First”, Hazell signed with EMI and a succession of releases over the next three years culminated with “Always”, widely regarded as her best work. Hazell released an album last year on Energise Records, as well as maintaining her profile as an evergreen club performer.