Patron of Pride in Surrey 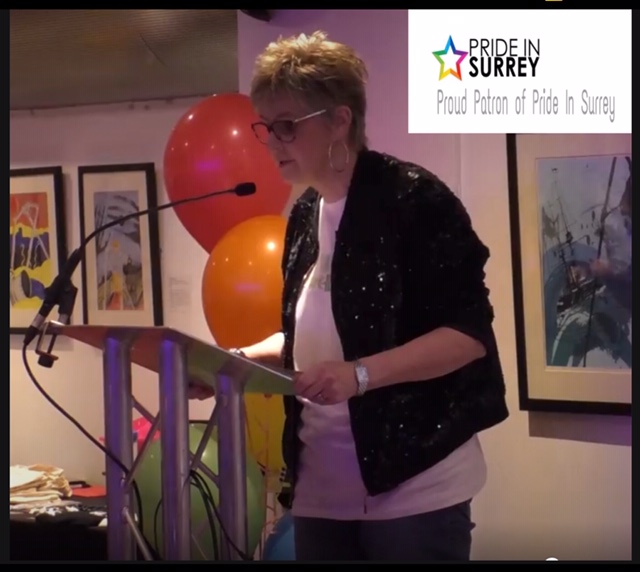 Hazell becomes the proud Patron of Pride in Surrey.

‘I have been performing at Pride events every year since 1984.

For over 36 years I have been flying the Rainbow flag here in the UK, and at Pride celebrations across Europe, America and even Africa.

My first appearance at a Pride in 1984 was in London’s Jubilee Gardens it was a very small event.

Records show that there was an estimated 2,000 people there, although in reality it felt like much less.
There were no regional events only the national Pride parade in London.

AIDS was still a death sentence. Being gay was not easy.

Over the following years “The Pink Pound” was identified as a marketing tool, and Pride in London started to feel more commercial and gradually less about the need for visibility and acceptance.

What had once been an act of defiance and a call out to be recognised had become something very different.

Many people who had previously travelled to London every year wanted visibility closer to home.

The Rainbow started to shine over other cities – Manchester, Birmingham, Brighton and gradually that Rainbow has started to illuminate the whole country.

So here I am 36 years later, still supporting Prides, especially the local events that are so very important.

This year there will be over 250 Prides in the UK, with many towns holding their first event ever.

Pride has found a home everywhere, and I am proud to have played my part in that.

In the current climate, with a dramatic increase in hate crimes towards the LGBTQ community reported in the UK and other countries, it is so important to show our visibility locally, and especially to actively support our Trans family.

And for those reasons, as a Surrey resident, I am delighted to join the Pride in Surrey Team as a patron, and will be sharing the message I give at every Pride –

Be kind to each other, be proud of who you are and always Turn It Into Love.

We are Pride In Surrey