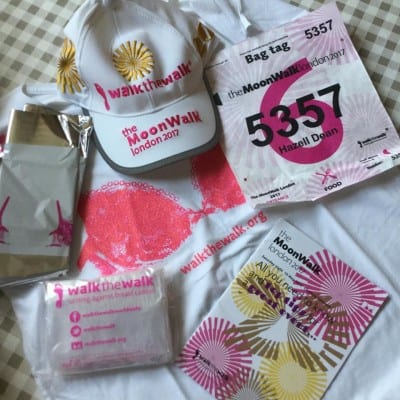 Due to an on-going ear, sinus and chest infection – two doses of antibiotics and still feeling terrible with a hacking cough, Hazell has been told by the doctor that she cannot take part in the MoonWalk on 13th May.

The cold and the exertion of a night walk, in a sequin covered bra, on top of an already weakened immune system is defintely NOT what the doctor had ordered.

As you can imagine, she is absolutely 100% gutted.

With your help Hazell has raised over £400 in sponsorship, which is part of over £3,000 raised to date by her friends “The Jaynebows”, all of whom will still be walking the walk on the night, raising money for breast cancer charities, and in memory of their friend, Jayne.

Co-pilot has picked up the gauntlet on Hazell’s behalf and will be representing Team Dean on the 20th London MoonWalk.

Hazell was scheduled to do interviews for the event, and was to join the MoonWalk organisers at a pre-walk party and to be on the start line to rally the troops on the night, but for the sake of her voice, it is sadly not to be.