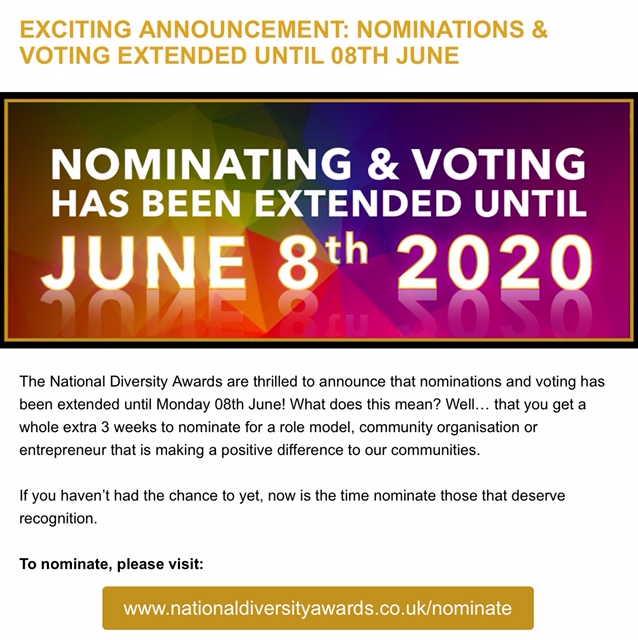 This is your last week to vote for Hazell in the ITV News National Diversity Awards 2020, before they select their shortlist.

Hazell Dean appeared at her first Pride event at London’s Jubilee Gardens in 1984, and has continued to do so every year since.

These were the days when record companies actively discouraged artists to be visible LGBT allies, and long before the Pink Pound was a sought-after currency.
Being an LGBT ally was not the accepted way to raise your profile, especially for the bestselling British Female Artist of the year (1984)

This was not considered to be a good career move, but Hazell refused to desert her loyal fan base.

This was the AIDS era.

She played her part, visiting AIDS units, and performing at fundraisers when this disease was still a guaranteed death sentence, and the stigma of those affected kept most people away. It did not deter Hazell.

Hazell stayed true and has, without fail, supported LGBT charities and Pride events every year since 1984, here in the UK, across Europe, America, and South Africa.

She took part in the huge Clause 28 demonstration in Manchester. One of the biggest mass demonstrations to take place in the UK.

Over the past 36 years Hazell Dean has more than earned her Rainbow Stripes – Headliners come and go, but Hazells support has never wavered, In fact she was acknowledged as the first Icon of Pride at Chester Pride in 2019.

There can be few, if any, other artists who have appeared at so many Prides around the world.

Hazell firmly believes that – “Being yourself should never be a battle” – “In the current climate, with a dramatic increase in hate crimes towards the LGBTQ community reported in the UK and other countries, it is so important to show our visibility locally, and especially to actively support our Trans family”

Hazell continues to support and appear at Prides across the UK and is proud to be a Trans Ally, donating £5.00 from the sale of every “HD2020” T-shirt from her merchandise range to Mermaids UK, making 0% profit

In fact, Hazell takes no profit from any of the T-shirts sold on her website, but has chosen a lesbian run small business located in Northern Ireland to produce Team Dean branded merchandise to order.

Hazell Dean is extremely proud to be patron of Pride in Surrey, and a friend & ally of Trans Radio UK.

The 2020 #MorePride campaign sponsored by Surrey County Council will see the amazing team of volunteers do even more for the Surrey community whilst also recognising the ongoing world-wide challenges for every LGBT person who may, potentially be living in fear of persecution or worst just because of their sexuality/gender.

Hazell was scheduled to take part in the Pride In Surrey #MorePride event and was to join the Parade with her family on 8th August, along with appearances at Taunton Chesterfield and Wakefield Prides.
However, due to the current lockdown situation, these events are all postponed.

Hazell will be celebrating Pride Month across her social media throughout June.

Over the years Hazell has become very familiar with being overlooked and has rarely received the recognition deserved for her unwavering support of the LGBT community.

She is humbled by the nominations received,  all of which speak about her impact on peoples lives from their own personal perspective and she is proud to have had the opportunity to be part the soundtrack and feature so strongly in so many peoples history.

How can you give evidence of the impact one person has on so many peoples lives?